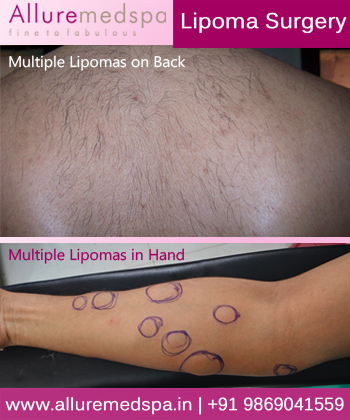 A lipoma is a harmless lump of fat. There are several types, mainly classified by where they appear. The most common location is just beneath the skin, where they are easily felt. But, lipomas can occur anywhere.

Most tissue in the body can grow beyond its normal limits and form a lump or tumor.

Multiple lipoma is a condition producing more than one lipoma in a patient. Many cases of multiple lipoma are caused by genetics that indicate a family propensity toward the condition. The problem is not typically life threatening; however, many patients choose to have their lipomas surgically removed. Patients often discover after having multiple lipomas removed that more have grown in their place.

Lipomas are fatty growths just under the skin. Comprised of fatty cells, they appear most often on the neck, upper legs, torso, and upper arm. They are also common in armpits. A diagnosis of multiple lipomas occurs when several too many lipomas occur throughout the body. Lipomas are the most common cause of benign soft-tissue growths.

The cost of Lipoma Removal Surgery

The cost of Lipomas removal will vary greatly depending on the complexity of the procedure and the number of lumps that need to be removed. You can check liposuction cost Mumbai also.

For an estimate on how much Lipoma surgery may cost, we recommend that you Call us on +91 9869041559 Or Fill inquiry form so that we can contact you for the detailed discussion.